VRChat, by far my most favourite VR game that I constantly play. A haven for traps, anti-social people, and wierdos. So what is it about? Why do I like it so much? Well lets find out~ 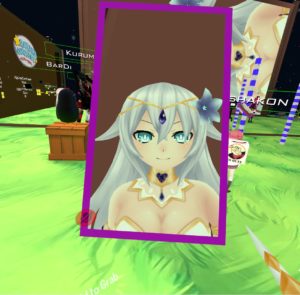 So lets start out at the beginning, You turn on your VR Headset, you turn on the game, and bam! You turn it straight off to learn Blender and Unity so you can make your own character. If you can make (find) it, you can play as it! With Cyberdimension Neptunia recently coming to PC, it made it super easy to get the new Cybernep characters and make them into your own character. I always play as Noire/Black Heart since I really like her and I prefer being a girl~ So you are now in the game as whatever you want it to be (unless you are a Ugandan Knuckles, then please leave >~>) and you start in the HUB, the area you start in every time you log into the game? So what do you do? 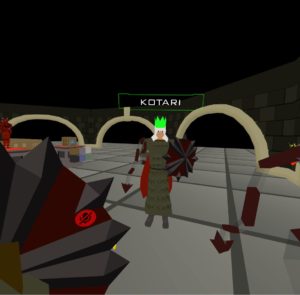 Well there’s so much to do! But if you skipped the part where you make your own avatar, then go steal one from an avatar world! the avatars and animations that people create are amazing! One of my personal favourites is the Grand Exchange world, which is Oldschool Runescape avatars (still hate the game I swear) , which includes icons like the Fally Guard, your good ole noob trying to buy a gf, and the great Duriel321, with amazing effects to go with it~ Once you have (or haven’t) got an avatar you like, then you can go explore the world of VRChat! 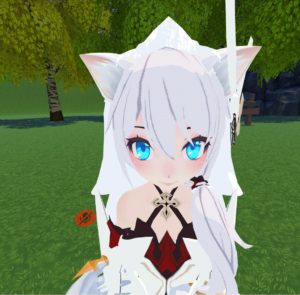 When you think about VRChat, its premise is actually really simple. All it really is is a place where you can make friends, hang out, and play with certain parts of each world that has been created by many talented people. But it is much more than that. You can be who you really want to be, you can make amazing friends that you would have never met without this game, and you can just mess about in VR, stacking cups to make a little pyramid that some wonderful Knuckles just decides is not good enough for this world and destroys. People have even been able to create worlds that include working vehicles, including a fully functioning Mario Kart level! If you haven’t already had a look of VRChat, then even if you do not have VR, I highly recommend you give it a download and have a look around. It is free afterall, and who knows? You might find some good laughs there (and most likely people who are as messed up as you are =p)

With all the good times, there are unfortunately the bad times that come with it. Starting off, you may have noticed me mention about a certain Ugandan Knuckles that has been plaguing the servers ever since the meme came about. I am a little bit hypocritical here, as I once played as one when it was not a dead meme, and it is still a meme at my workplace (we still click to communicate sometimes at my workplace with my bruddah, and yes, we do it in front of customers >_> ) , but unfortunately there are people who take it too far and are just toxic and cancerous with this dead meme. Then of course there are people who just want to be a complete arse to people because its the internet and what can you do about it. There’s also the minor (well major in VR) inconveniences, such as people who have really loud effects that deafen you, and effects that effect the whole world that either blind you, or are outright annoying. However “most” of the time people will turn them off if asked. I personally love most effects like the Goku ones, but I know they can get really annoying really fast for some. 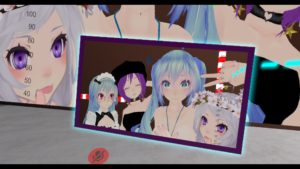 All in all, I absolutely love this game and everything about it. I have made so many great friends from it and made many good memories that I most likely would not have made without it, due to me being quite the shut in, and only leaving the house for DnD/Werewolf and Work (with the yearly Runefest (yes I still hate Runescape)). So if you are someone who is not the best in socializing, or even if you are, I highly urge for you to give it a try! I play it constantly and I don’t see myself stopping any time soon.

Thanks for reading as always <3~